‘What is Done is Done!’ is an interesting darkly humorous reimagining of ‘Macbeth’ 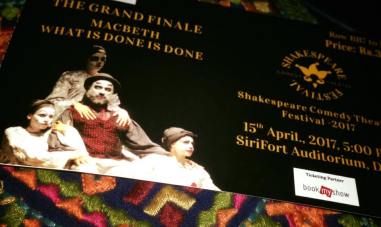 What is Done is Done! is only the second Shakespearean adaptation with clowns (director – Rajat Kapoor) that I have had the pleasure to watch – the first being Nothing Like Lear. Shakespeare has been around for a really long time, alive in text books, movie adaptations, references both literary and popular, in fact he has seeped into our lives with the subtlety of everyday speech, which, unsurprisingly, owes a lot to the Bard. But such familiarity does not make it easy to shed any new light on Shakespeare’s plays. And it is precisely on this note that the play begins.

Two clowns (Vinay Pathak and Jim Sarbh) enter the stage and recount how they came to be the producers of this production within a production. The anecdote involves two instances of Rajat Kapoor being kicked in the arse (not my words) – first by the Royal Shakespeare Society that did not quite warm up to the idea of clowning with a great tragedy like Macbeth and instead of appropriating funds for the play, contributed the aforementioned grant; and second by circus authorities that found Kapoor’s reading of the play not very deep (again, not my words). It is easy to adapt a play as popular as Macbeth, one of the two clowns observes; the audience laughs, hopefully, knowing that it is just the opposite. Adapting any play by Shakespeare is a big burden on the playwright and the director. How do you add a new perspective to it? How do you do justice to the themes of the play by reimagining it? How do you squeeze in references to our times without distracting the audience from the main plot?  What is Done is Done! mostly succeeds at these, but it does not truly matches the balance that it achieved with the marriage of the themes of the text and the times we live in in Nothing Like Lear.

The jokes, mostly in parts where the two clown-producers have a go at the audience, felt a bit familiar, even though a few quips about certain recent developments were genuinely funny. These comic interludes (a highly inappropriate term to be used for a play that weaves in and out of the funny, the tragic and the downright scary almost seamlessly, but for these interludes)  seemed like scenes of comic relief that were confused if they belonged to Shakespeare or Marlowe (the latter’s are quite crudely woven into the plot).

I liked that these scenes acted like a chorus, bridging the gap between the play’s themes and situations of our times and asking certain questions. But what I did not like was they tried to answer these, at times quite obviously.

However, the play shone the brightest at the moments of its tragic intensity and because of its darkly humorous tone. Ranvir Shorey delivered a very nuanced performance as Macky B (Macbeth), switching his comic garb for his tragic ones and vice versa, without much effort. The rest of the cast were also up to the task and gave highly convincing performances.

There were certain parts/elements in the play that I really enjoyed. One where the entire cast poses together for a photograph and says ‘anachronism’ instead of ‘cheese’. One cannot but gleefully recall the most famous anachronism in Shakespeare’s Julius Caesar – of the clock striking 3. The use of three actors (who also played the three witches) to play Lady Macbeth at the same time, something I do not know (I would not count on my limited knowledge though) if it ever has been done, was very interesting keeping in mind the emotional disintegration she ungoes later in the play. The dagger scene. The cinematic murder-ambush-torture scenes (one is even in slow-mo). How certain scenes/actions were used to foreshadow events in the future. Macbeth-Banquo-Macbeth-Lady Macbeth scenes.

I would recommened this play to everyone who enjoy good theatre. Catch it the next time the troupe comes to your city.